This article was originally published on Avispa. 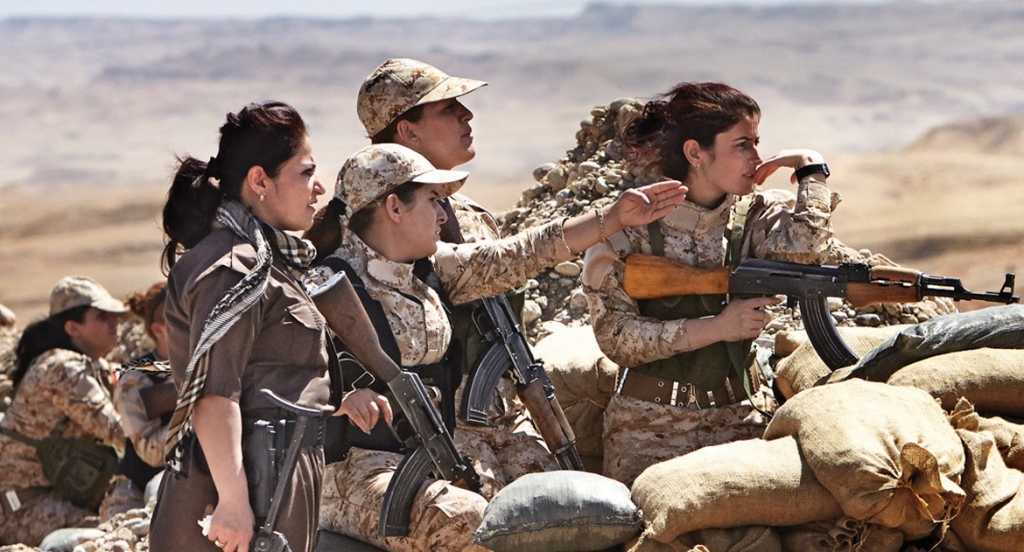 For María de Jesús Patricio Martínez, representative of the indigenous people of Mexico and the National Indigenous Congress CNI.

First of all, we want to send our deepest respect and revolutionary greetings to our Mexican sister, from the mountains of Kurdistan to the Sierra Madre mountain range beyond the oceans. Despite the rivers, mountains, deserts, valleys, canyons and seas that separate us, we are indigenous sisters and brothers, no matter what part of the world we are in.

With you, we share our struggle, our resistance against occupation and colonialism, and our dream of a free life, and in this sense, we who belong to the Kurdish Liberation Movement declare that we consider the struggle for self-determination, self-administration and self-defense of the indigenous peoples of Mexico organized in the National Indigenous Congress (CNI) as our own struggle, and we support you on the basis of principles of revolutionary solidarity.

Indigenous peoples are the veins through which the most important social and cultural values of humanity have been transmitted, from the first moments of socialization until our times. Without a doubt,  no people is superior to another, but at a time when capitalist modernity is trying to destroy every communal value, indigenous peoples are the safeguard of the social fabric of all humanity. Thousands of years of collective memory resurge in our songs, our rituals, our prayers, our tattoos, our dances and our traditions. And so the struggle for our own identity against the efforts of capitalist modernity to erase the roots and the memory of our peoples becomes the most meaningful of all forms of resistance.

In Latin America, as in Kurdistan, women are leading this resistance. In our countries, which were the cradles for thousands of years of the culture of the mother goddess, we see that women and life, women and freedom, women and land, and women and nature are inextricably related. In Kurdistan, we express this reality in our slogan “Jin Jiyan Azadî,” which means “Women Life Freedom.”
The bodies and souls of women are the reflection of the universe on the land. Thousands of years ago, during the Neolithic Revolution, it was the women, through their social organization, who led in making changes that enabled the cultivation of the land and the beginning of a sedentary life in harmony with nature. That’s why women were the first to be enslaved by the patriarchal state civilization, which arose as a counterrevolution based on domination, exploitation and occupation.

Parallel to the domination of women was the ever more rapid domination of nature. It was through the oppression of the first form of nature that the second came about, transforming both into the pincers that capitalist modernity used to forcefully exert pressure against historical society, with a greater ability to destroy it.  Consequently, legitimate resistance arising in pursuit of self-government, self-determination and self-defense represents the greatest possible struggle for freedom.

We in Kurdistan, enlightened by the struggles of the indigenous peoples of Latin America, have developed our own defense against modernist capitalist forces and attacks from the colonialist states that occupy our soil. We want you to know that we continually receive special inspiration from your experiences of self-government, good government and communalism. We hope that our experiences and breakthroughs in the struggle will likewise serve as sources of inspiration for you.

One of the greatest achievements in our movement is the equal participation and representation of women. This was the result of great sacrifices made and intense struggles waged by women, and we finally won equal participation in making all decisions. Not as individuals, but as representatives of the organized, collective will of the Kurdish Women’s Liberation Movement. This is the way we are taking our place in each and every aspect of struggle. With our system of co-presidencies, established from the ground up, we represent the will of women in each and every decision and develop a democratic kind of politics that goes against all patriarchal, traditional forms of politics.  But to be able to do this, it was necessary for us to become an organized force once and for all. Being organized is the most important requirement for winning victories. To the extent that we’re organized, we’re capable of resisting the dominant colonialist system and building our own governmental alternative.

For that matter, organization is our most important arm for self-defense. In the past, many peoples and movements have not been able to attain the hoped-for results because they weren’t well enough organized. It wasn’t possible to transform some historical moments into great victories precisely due to the lack of organization. We may not have reached an in-depth understanding of the meaning and importance of this fact, but we’re now in another stage of struggle. We’re obliged to multiply our efforts to heighten our levels of organization in order to take advantage of this new opportunity to triumph – at a time when the modernist capitalist system is going through yet another deep crisis in its most decisive aspects. History demands it of us. You of the National Indigenous Congress have shown that you recognize this reality by declaring the presidential elections in Mexico a key stage in a process that will result in a rise in your levels of organization.

We, of the Kurdish Women’s Liberation Movement wish to express our support for your decision, based on the conviction that this goal will be reached and taken to a much higher level, starting with these elections and the strategies developed around them. Our leader Abdullah Öcalan, who has been imprisoned under the harshest of conditions of isolation by the Turkish colonialist state since 1999, made a highly important analysis of this at the end of the twentieth century. Our leader Apo, foresaw that the twenty-first century would be the century of women’s liberation if we are able to grow and decide on our manners and mechanisms of organization. The reason for this conclusion was the evident structural crisis of the patriarchal system, which has been based on our enslavement.

The patriarchal system seeks to overcome this crisis by raising the level of attacks against women to the level of a systematic war. By concentrating its attacks against women the world over through different means and methods, the system aims to cut off the road to liberation that we’ve taken. The murders of women that have reached the level of genocide in your country, and the murders of women leaders in Latin America are the most concrete indicators of this reality. We want you to know that we consider all the women and leaders of indigenous peoples who have been killed by the operative arms of the dominant system as our own martyrs. We are also struggling to make our hopes and dreams reality. Our martyrs never die. We draw force from them, and they are reborn in every struggle we undertake.

In this context, your decision as Mexican indigenous people to name a woman comrade as representative of your will and make her your candidate in the upcoming presidential elections is very significant. As a matter of fact, comrade Marichuy is not only the voice of the indigenous peoples of Mexico, but at the same time, the voice of the women of the world. We want to say that we affirm the importance and value of her candidacy as the representative of peoples denied, women enslaved and thousands of years of ancestral wisdom threatened with disappearance by capitalist modernity.

As the Kurdish Women’s Liberation Movement, we declare our support and solidarity with the compañera and the National Indigenous Congress, not only at the moment of this electoral juncture, but in the entire struggle that your movement is pursuing. We know that the results of the elections themselves do not matter, that they are only one of the roads that the indigenous peoples of Mexico have taken in this process at this particular moment of struggle. In this light, the victory is already a fact because the modernist capitalist system feeds off of the division of forces and the disorganization of peoples and societies that it aims to dominate, but you have constructed the terrain for success by forging organized unity.

From this point on, it is important not to lose sight of this goal, which is none other than stronger organization. Your triumph will be our triumph. Our struggle is your struggle. We are the brother and sister people of the mountains that have risen from the same deep waters. Even in our different tongues, we share the same dreams, we fall in love with the same utopia, and we resist for the sake of the same love. From here, we send you all the force necessary in this new stage, we greet you with our most genuine revolutionary feelings, and we embrace you with all our solidarity and comradeship.

Long live the sisterhood of the peoples!

Long live the sisterhood of the people!