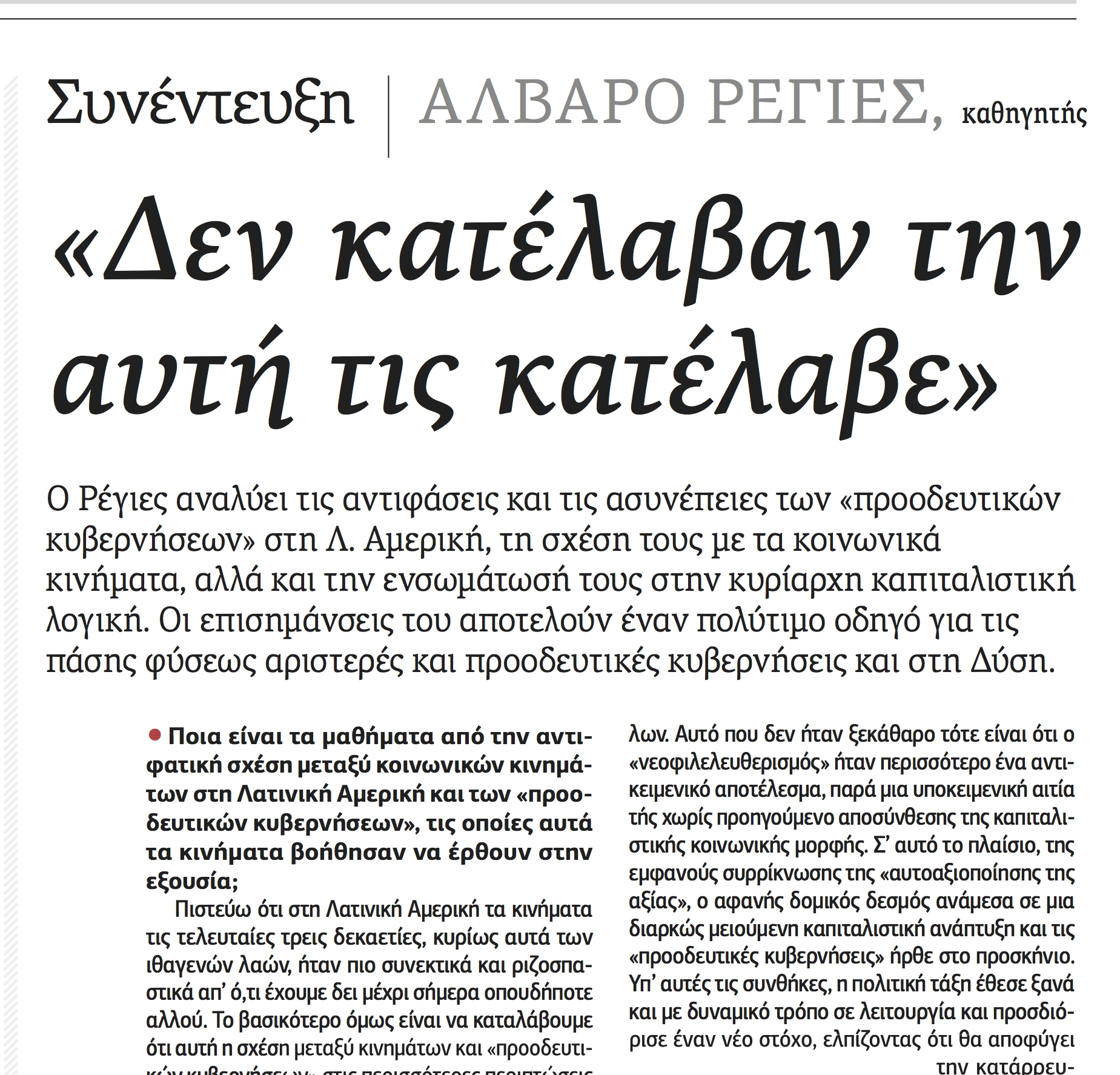 Interview with Alvaro Reyes (the Workshop for Intercommunal Study)

What are the lessons from the contradictory relationship between social movements in Latin America and the “progressive governments” that these movements helped bring to power?

I believe that the Latin American movements of the last three decades, particularly those of indigenous peoples, were far more cohesive and radical than anything we have yet to see elsewhere. All the more reason why it is important to understand that the relation of these movements to the “progressive governments” in most cases proved fatal. This disheartening outcome was due in no small part to an underestimation of the global political situation. That is, many of these movements framed their struggle as one against what they understood as the effects of “neoliberalism”–an onerous debt crisis, austerity measures, and an interminable wave of privatizations. They consequently placed their energies on removing the traditional political class and bringing explicitly anti-neoliberal parties to power. After their wild success in these efforts it was difficult to understand why it was that, despite programs to alleviate the worst effects of “neoliberalism,” the motor behind those effects, an extremely inegalitarian and volatile form of capitalist accumulation, remained untouchable. In retrospect, and thanks to these struggles, it is easier to see that this impasse arose because the general strategy of the dominant strains of these movements had presumed that “neoliberalism” was a subjective political offensive on the part of elites that could be reverted through a subjective counter-offensive through existing state channels. What was not clear then is that “neoliberalism” was instead the objective effect, rather than a subjective cause, of the unparalleled decomposition of the capitalist social form. Within this context of the evident contraction of “the self-valorization of value,” the otherwise invisible structural tie between an ever-receding capitalist growth and “progressive government” came to the fore. Under these conditions the political class had been forcefully refunctionalized and assigned a new purpose–guarding “profitability” in the hopes of avoiding collapse. This in turn made it clear that the impersonal mechanisms of the market had become a direct, rather than indirect, constraint on state actors, leaving little room for “progressive” parties to respond to social demands for even moderate structural change. Given these constraints, and thus seeing structural demands as a threat, it is no surprise that the key figures of the “progressive governments” slowly moved to supplant and eventually neutralize the movements. In sum, although these counterhegemonic projects imagined that through the “progressive governments” they had “taken power,” in retrospect I don’t think it’s an exaggeration to say that in reality they had been taken by it.

Some of these “progressive governments” in Latin America continue to implement the same neoliberal “growth” policy of their political predecessors, i.e extractivism and exportism (exports orientation for the produced goods). How do you explain?

What’s the role of the “programs against poverty” in the process of neutralization of mass social movements?

I would argue that the greatest damage was done by “progressive governments” at the level of fabricating and managing the subjective desires of the movement. That is, the movements that had shown such incredible political effectivity at removing the region’s traditional elites were through these programs encouraged to channel all social discontent into demands for consumption at the direct expense of the logic of social solidarity. Ironically then, by attempting to neutralize potential threats from the most marginalized sectors, the “progressive governments” simultaneously eroded the cohesion of the only social forces capable of confronting those on the right. In this sense the “progressive governments” not only decimated the movements but also undermined their own long-term viability.

Raul Zibechi claims that social change won’t be the outcome of government action, but of the mobilization and the fight of those “below and to the left”. What’s your point of view?

Well, let me first clarify that the concept of “below and to the left” comes from the Zapatistas. I think that it is important to mention this because they coined this concept in order to point out that given the structural constraints placed on the contemporary state by the decompositional dynamics of capital, they have concluded that today, “above and to the left” can exist only as an oxymoron. So yes, a fight of those “below and to the left,” but a fight for what? If it is simply a fight to influence or pressure those above, then the last 30 years of the Latin American experience shows us how such a mobilization is likely to end. In contrast, the Zapatistas insist that in the context of an increasingly generalized social abandonment, we must move beyond the cycle of demands, protests, elections, and broken windows that characterize so many movements around the world today. As an alternative, they suggest that those “below and to the left” must make the permanent exercise of self-government their single greatest strategic priority (with state engagement reduced to uneven tactical necessities). They believe that it is only by creating a new web of institutionality (at ever expanding levels of local, regional, supraregional, etc.)–in order to both exercise the capacity for collective decision-making and meet our pressing needs (food, housing, education)–that we might organize the social force necessary to revert the consequences of contemporary capitalism and move to make these new institutions the basis for a new society-wide order. It seems impossible, I know, but I think a sober look at our situation shows that nothing short of impossible will suffice.

What do the western countries have to learn from indigenous people’s culture about the relation between humans and nature and about the idea of progress?

I think what these peoples have to teach is absolutely vital, but I’m not sure it’s cultural. ‘Capitalist civilization’ (if we can speak in these terms) divided the world into a system of production and a system of enslavement and plunder. European descendent peoples were firmly within the protection provided by the categories of ‘worker’ and ‘citizen,’ while non-European people (more specifically Black and indigenous peoples) were most often objects of colonialism and extermination. This ‘civilization’ is in the midst of an unmitigated involution and consequently the protections previously afforded to European descendant peoples are being nullified. Thus, European descendant people today have a choice: they can either lament this catastrophe and pretend to blame non-European peoples for their new condition, or they can become students of Black and indigenous peoples who were forced to learn to survive and resist within this catastrophe (that for them began five centuries ago) and together move to build a life after capitalist “growth.”

Analysis from the Workshop.