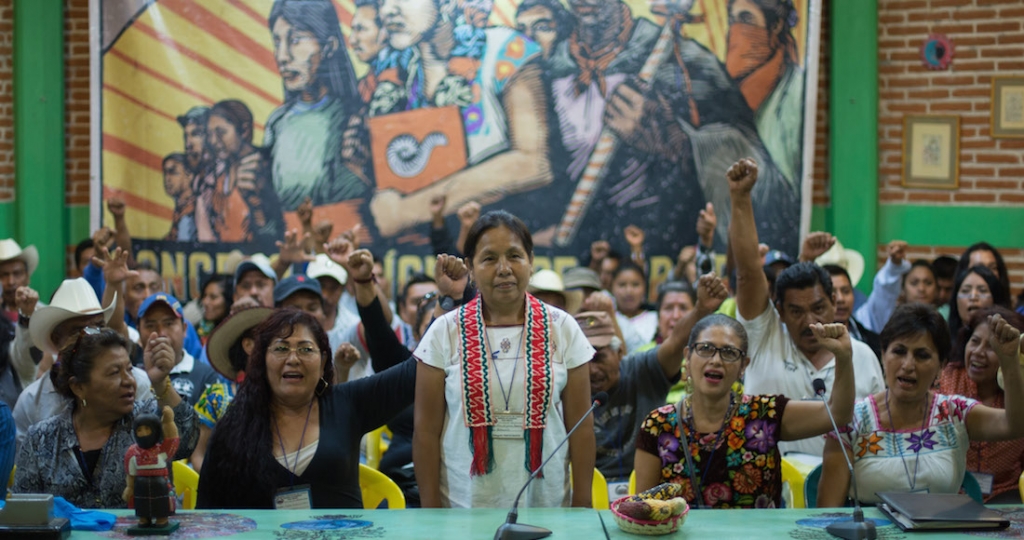 In pre-electoral times and in the shadow of state fraud in the recent gubernatorial elections in Coahuila and the State of Mexico, the clock of the National Indigenous Congress (CNI) and the Zapatista Army for National Liberation (EZLN) marks the hour of the peoples in resistance: the hour of anticapitalist struggle, below and to the left, as a way to continue to build life which becomes word, learning, and collective agreements in the face of so much death, repression, and dispossession of territory and resources; of such destruction and barbarity.

In order to dismantle from below the power imposed by those above, the constitutive assembly of the Indigenous Governing Council (CIG), held in April at the University of the Earth in San Cristóbal de la Casas, Chiapas, took the first steps towards strengthening the fabric of collective organization of nations, tribes, and originary peoples in rebellion at a national scale. This effort takes the form of a self-governing body constituted as a single council which is coordinated to represent all the struggles and resistances that oppose the capitalist privatizing offensive that has militarized and paramilitarized the territories where they live.

More than 1,252 representatives of indigenous peoples and communities and 230 delegates from the EZLN participated in the assembly, and as a show of their maturity and awareness of the necessity of unity, decided to create a council as a collective form of government, a form of direct democracy in which the peoples are the protagonist. The Indigenous Council embodies a project of democratic, horizontal, assembly-based organization in which everyone [todas y todos] discusses and decides; as differentiated, of course, from the empty shell of liberal representative democracy which these days in Mexico displays the exhaustion of the electoral path.

In the short and medium term, the council seeks to curb the counterinsurgent war of expansionist, criminal, and militarized capitalism and to preserve the life of the peoples in resistance in the face of the violent dispossession of lands, forests, water, communal resources, and all that which is threatened by the megaprojects of the owners of money.

Definitively, this is about the defense of a mode of living and being, of relating to mother earth, which is threatened by mining and hydrocarbon projects, by the big energy corporations in their hydraulic, wind, and solar modes, and by water privatization and new infrastructure projects in the so-called Special Economic Zones (ZEE). These, with their epicenter in the isthmus of Tehuantepec, will open a new phase of accumulation through neocolonial displacement and dispossession of territories where forms of communal and ejidal property survive.

By decision of the assembly, an indigenous Nahua woman, a traditional medic and herbalist, María de Jesús Patricio (Marichuy), who is 54 years old and from Tuxpan, Jalisco, will be the spokesperson of the Indigenous Governing Council and candidate for the presidency of the Republic.

According to the racist and classist perspective of some turncoats on the clientelist, electoralist, and parliamentarist left who think that indigenous people should not interrupt those spaces considered the exclusive domain of a political class cum mafia, the unity of the left can only be achieved by attaching oneself, in subaltern and apolitical fashion, to a political party. Those who would classify the indigenous initiative as divisive can rest easy: you can’t divide that which doesn’t exist in the parliamentary realm. What’s more, Marichuy will not tour the country in pursuit of votes, because the struggle of the CNI and the EZLN is not for power. They do not intend to compete with the parties and their politicians, but rather to put indignation, resistance, and rebellion on the ballot in 2018.

The spokesmanship of this woman, who is herself an important reference point in Tuxpan among both Nahuas and mestizos, will be dedicated to calling the indigenous peoples and civil society to organize themselves with autonomy to confront militarized capitalism without falling into electoralism, and to spur on an autonomy which has education, justice, and self-government as its axes. Her campaign will seek to denounce and make visible the pain and obscurity of the originary peoples, and to create and multiply dignified forms of resistance to the bad government—whose army and police are in bed with or accomplices of narcoparamilitarism— and its bosses, the owners of the large corporations who murder, disappear, enslave, dispossess, loot, destroy, and pollute in their predatory offensive.

The initiative of an independent candidacy, which has been discussed in the heart of 43 indigenous peoples and 523 communities in 25 states of the country since last October, derives from a collective thought process, from a historic practice of the indigenous peoples and nations which have used different strategies of struggle to ensure their continuity and autonomy.

At the margins of the dominant party-ocracy, those political subjects who have been made invisible and historically denied their capacity for decision-making, political action, and ideating an inclusive project, today push forward an alternative to the system of hegemonic representation which is delegitimized and in crisis. They seek to build a new, emancipatory horizon and to cement a power of those below and to the left with a candidacy that questions the monopoly on politics and societal representation by the professionals of the electoralist institutionalized parties.

They will attempt to deepen a national movement to confront non-violently the transnational capitalist class with its unjust structures of exploitation and domination. But at the same time, in the context of multiple forms of state violence bearing the seal of corruption, impunity and simulation as tools of the recolonization of territories, the proposal seeks to open a path to peace. The problem, then, is not to vote or not; the problem is capitalism. And faced with capital’s culture of death, the path ahead is that of organized resistance.

Latest from Expressions of Crisis