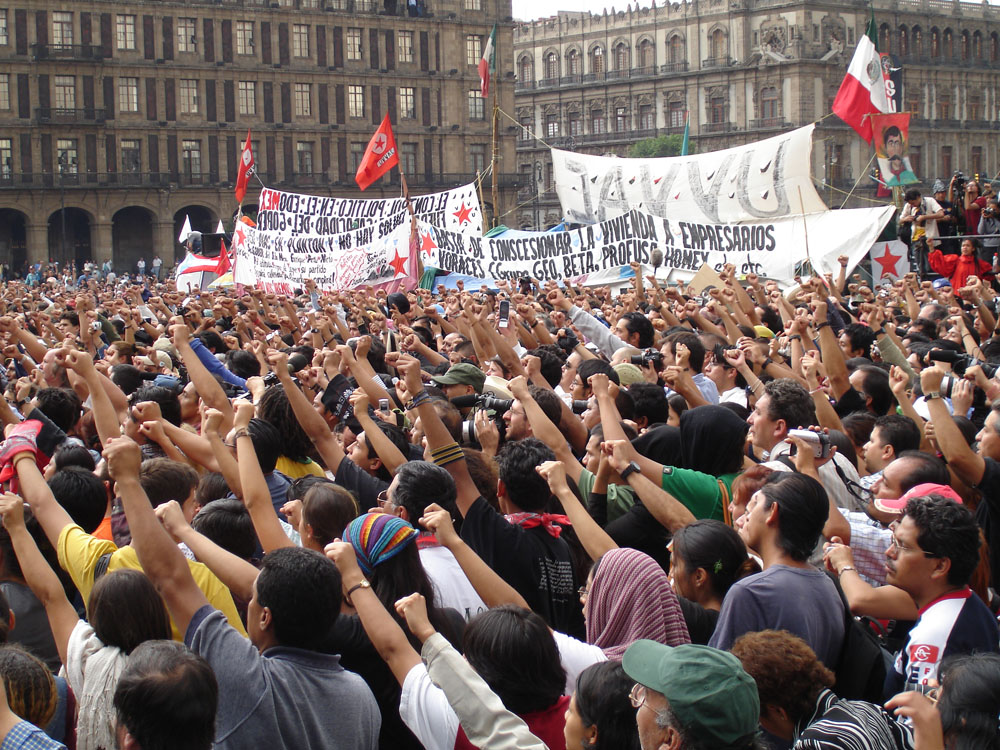 To the Originary Peoples of Mexico:

To Civil Society of Mexico and the World:

To the Free Media:

This is the time of the originary peoples, the time for us to replant and rebuild ourselves. It is time to go on the offensive and this is the agreement that we have laid out for how to do so, from our perspective as individuals, as communities, as originary peoples, and as the National Indigenous Congress [CNI]. It is time for dignity to govern this country and this world and for democracy, liberty, and justice to flourish in its step.

We are announcing here that during the second phase of the Fifth National Indigenous Congress we meticulously analyzed the results of the consultation process that we held among our peoples during the months of October, November, and December of 2016. In that process, we issued agreements from communal, ejidal, collective, municipal, inter-municipal and regional assemblies in all of the ways, forms, and languages that represent our peoples in the geography of this country, once again bringing us to understand and confront, with dignity and rebellion, the situation that we face in our country and the world.

We appreciate the messages of support, hope, and solidarity that came from intellectuals, collectives, and peoples in response to our proposal entitled “Let the Earth Tremble at its Core,” which we made public during the first phase of the Fifth National Indigenous Congress. We also acknowledge the critical voices, many of them making fundamentally racist arguments, that expressed indignant and contemptuous rage at the idea that an indigenous woman would aspire not only to contend for presidential election, but would propose to truly change, from below, this broken country.

To all of them, we say that the earth indeed has trembled, and we along with her, and that we intend to shake the conscience of the entire nation, and that, in fact, we intend for indignation, resistance and rebellion to be present as an option on the electoral ballots of 2018. But we also say that it is not at all our intention to compete with the political parties or with the political class who still owe this country so much. They owe us for every death, disappearance, and imprisonment, and every dispossession, repression, and discrimination. Do not mistake our intentions. We do not plan to compete against them, because we are not the same as they are. Unlike them, we are not filled with lies and perverse words. We are instead the collective word of below and to the left, that which shakes the world and makes it tremble with epicenters of autonomy, and which makes us so proudly different from them that:

Our resistances and rebellions constitute the power of below. We don’t offer empty promises or actions, but rather real processes for radical transformation where everyone participates and which are tangible in the diverse and enormous indigenous geographies of this nation. This is why, as the National Indigenous Congress, which brings together 43 peoples of this country in this Fifth Congress, WE AGREE to name an Indigenous Governing Council with men and women representatives from each one of the peoples, tribes, and nations that make up the CNI. This council proposes to govern this country. It will have an indigenous woman from the CNI as its spokesperson, which is to say a woman who has indigenous blood and who knows her culture, and this indigenous woman spokesperson from the CNI will be an independent candidate for the presidency of Mexico in the 2018 elections.

To obey, not command

To represent, not supplant

To serve others, not serve oneself

To convince, not defeat

To go below, not above

To propose, not impose

To construct, not destroy

This is what we have invented and reinvented, not simply because we want to, but because it is the only way that we have to continue existing – by following new paths forged from the collective memory of our own forms of organization and that are the product of resistance and rebellion, in order to confront, every day, the war that has not ended and yet has not been able to do away with us. Using these forms it has not only been possible for us to build a path toward the full reconstitution of our peoples, but also toward new civilizational forms. In other words, it has been possible to build collective hope that is transformed into communities, municipalities, regions, states, and which is able to respond precisely to the real problems that the country is facing, far away from the political class and their corruption.

From this Fifth National Indigenous Congress, we call on the originary peoples of this country, the collectives of the Sixth, the workers, the coalitions and committees who struggle in the countryside and the city, the students, intellectuals, the artists, and scientists, the elements of civil society that are not organized, as well as all good-hearted people to close ranks and go on the offensive. We call on you to dismantle the power of above and to reconstitute ourselves now from below and to the left, not only as peoples but as a country. We make a call to come together in a single organization where dignity will be our final word and our first action. We call on all of you to organize with us to stop this war, and to not be afraid to build ourselves and sow our seeds on the ruins left by capitalism.

This is what humanity and our mother earth demand of us. It is the time for rebellious dignity. We will make this a material reality by convoking a constituent assembly of the Indigenous Governing Council for Mexico in the month of May 2017. From there we will build bridges toward the compañeros and compañeras of civil society, the media, and the originary peoples in order to make the earth tremble at its core, to overcome fear and recuperate what belongs to humanity, what belongs to the earth and what belongs to the peoples. We do this so that we can recuperate the territories that have been invaded or destroyed, so that the disappeared of this country can be returned, so that all political prisoners are freed, so that there can be truth and justice for all of those who have been murdered, so that there can be dignity for the countryside and the city. That is, have no doubt, we are going for everything, because we know this might be the last opportunity we have as originary peoples and as Mexican society to peacefully and radically change our forms of government, making dignity the epicenter of a new world.