This article was originally posted on the Boggs Center’s website. 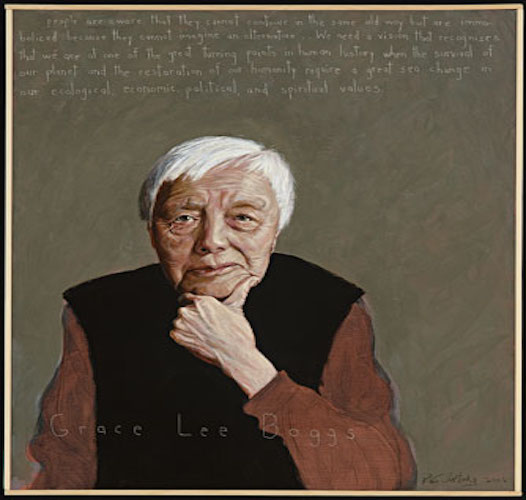 A specter is haunting the American people– the specter of destruction by capitalism. In its limitless quest for profits capitalism has defiled our human relationships by turning them into money relationships. It has transformed Work from a precious human activity into Jobs which are done only for a paycheck and which have become increasingly meaningless and increasingly scarce as the profits from our labor are invested in increasingly complex machines. It has undermined the Family ties by which human beings down through the ages have absorbed naturally and normally the elementary standards of conduct and the sense of continuity with the human race which make us human. By encouraging us to value material things more than social ties, it has turned us into a society of selfish individualists and materialists, seeking to compensate for the spiritual emptiness of our lives by the endless pursuit of distractions.It has despoiled the Land, Waters and Air on which our lives depend.

Up to now, most Americans have been able to evade facing this destructiveness because it was primarily other peoples, other races, other cultures which were being destroyed. For the sake of westward expansion the Native Americans were massacred and their survivors driven into the world’s first concentration camps. To clear the land and build the agricultural infrastructure necessary for industrial development, millions of Africans were enslaved and the ideology of racism created. Convinced that it was our destiny to rule the entire continent, Americans seized the Southwest from Mexico. When we came to the end of the American frontier, we reached out to Latin America and the Pacific. When capitalist expansion and centralization created the Great Depression, we got our economy moving again by producing for World War II. After the war we used our economic power and monopoly of nuclear weapons to protect capitalism in Europe from socialist revolution and to crush revolutionary struggles in the Third World by supporting and installing military dictatorships.

Ever since World War II it has been able to keep going only by producing weapons of destruction and by turning us into mindless consumers, unable to distinguish between our Needs and our Want, utilizing the mass media with the same cunning with which Hitler turned the German people into collaborators in their own destruction. New shiny cars and appliances have been pushed as sure ways to win love for ourselves. Women (and men) have been turned into sex objects. Credit cards have been promoted as badges of status.

As this brainwashing process has gained momentum over the last few decades, the moral and social fabric of our society has been steadily undermined. Our small towns and communities, in which neighborliness and character were more important than money, have been replaced by suburbs. Our judgment has been so distorted that we now consider “square” those who still value self-reliance and hard work, while we admire the “big spender.” Banks and loan sharks, whom we once viewed with suspicion, we now consider our friends, while more and more we fear those closest to us, our families, co-workers, and neighbors. Crime, mental illness, drug addiction, alcoholism, teen-age pregnancy and venereal disease have reached near epidemic proportions because, instead of depending upon each other for company and comfort (as human beings have done down through the ages), we look to more colorful goods and new, more exciting experiences to make us feel good.

Pursuing private happiness in the form of material goods, we did not care that we were passing on these materialistic and individualistic values to our children. Instead of recognizing that we were breeding criminals by the supreme value we had put on material things, we tried to project the blame for crime onto others. We ignored the growing threat to our health from the Love Canals that were being created by the dumping of industrial waste in our waters and our earth. We closed our eyes to the degrading lives being lived by the millions whom capitalism had already cast onto the Welfare rolls, little dreaming that the same fate was being prepared for us

But now the chickens have come home to roost. While we were collaborating with capitalism by accepting its dehumanizing values, capitalism itself was moving to a new stage, the stage of multinational capitalism. Big capitalists have been swallowing up smaller ones, creating giant corporations who buy and sell other giant corporations all over the world. A few hundred multi-national corporations now move capital and goods everywhere and anywhere, according to where they can make the most profit.

These multinational corporations have no loyalty to the United States or to any American community. They have no commitment to the reforms that Americans have won through hard struggle. Instead of giving more each year, they demand that we accept less or else.

If American workers do not accept wages and benefits competitive with those of Japanese or Mexican or Filipino workers, they do not hesitate to shut down a plant that has been the heart of the economic life of a city or region.. City workers and school teachers find that they are no longer needed; small businesses go bankrupt. So millions of workers, skilled and unskilled, blue collar and white collar, have already been laid off . Whole cities have been turned into wastelands by corporate takeovers and by runaway corporations. Yet our city and state officials, conservative or liberal, Democrat or Republican, white or black, continue to compete with one another to offer tax breaks and reduced worker benefits to these corporations, knowing full well they will pick up and leave when they can make more profit elsewhere.

Meanwhile, because American capitalism no longer dominates the world market, our government can no longer afford the reforms with which all administrations since the Great Depression have tried to make capitalism more palatable. So social and Welfare programs are being ruthlessly dismantled; unions are being busted or immobilized; the moral, environmental and civilized restraints on capitalist expansion which have been won only after decades of struggle are being abandoned.

That is why we must now make a second American revolution to rid ourselves of the capitalist values and institutions which have brought us to this state of powerlessness or suffer the same mutilation, the same destruction of our families and our communities, the same loss of national independence as over the years we have visited upon other peoples and other nations.

This Lecture was presented by the American Academy in Berlin. “The current
This article was originally published in the New Left Review.  En español aquí.
“My meaning of disinformation is a real historical break in political discourse
This article was originally published in The Baffler. A secret question hovers
“Without understanding how masculinity was socially formed, one cannot analyze the institution
Go to Top