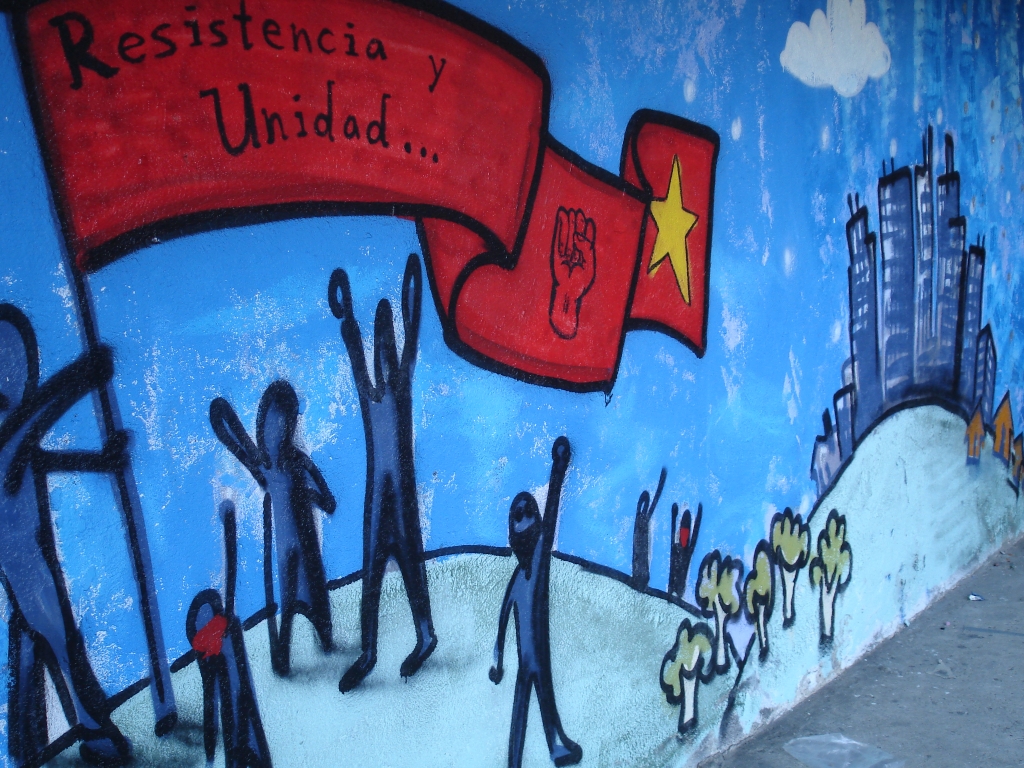 To the people of the world:

To the free media:

Convened for the commemoration of the 20th anniversary of the National Indigenous Congress and the living resistance of the originary peoples, nations, and tribes of this country called Mexico, of the languages of Amuzgo, Binni-zaá, Chinanteco, Chol, Chontal de Oaxaca, Coca, Náyeri, Cuicateco, Kumiai, Lacandón, Matlazinca, Maya, Mayo, Mazahua, Mazateco, Mixe, Mixteco, Nahua, Ñahñu, Ñathô, Popoluca, Purépecha, Rarámuri, Tlapaneco, Tojolabal, Totonaco, Triqui, Tzeltal, Tsotsil, Wixárika, Yaqui, Zoque, Chontal de Tabasco, as well as our Aymara, Catalán, Mam, Nasa, Quiché and Tacaná brothers and sisters, we firmly pronounce that our struggle is below and to the left, that we are anticapitalist and that the time of the people has come—the time to make this country pulse with the ancestral heartbeat of our mother earth.

It is in this spirit that we met to celebrate life in the Fifth National Indigenous Congress, which took place on October 9-14, 2016, in CIDECI-UNITIERRA, Chiapas. There we once again recognized the intensification of the dispossession and repression that have not stopped in the 524 years since the powerful began a war aimed at exterminating those who are of the earth; as their children we have not allowed for their destruction and death, meant to serve capitalist ambition which knows no end other than destruction itself. That resistance, the struggle to continue constructing life, today takes the form of words, learning, and agreements. On a daily basis we build ourselves and our communities in resistance in order to stave off the storm and the capitalist attack which never lets up. It becomes more aggressive everyday such that today it has become a civilizational threat, not only for indigenous peoples and campesinos but also for the people of the cities who themselves must create dignified and rebellious forms of resistance in order to avoid murder, dispossession, contamination, sickness, slavery, kidnapping or disappearance. Within our community assemblies we have decided, exercised, and constructed our destiny since time immemorial. Our forms of organization and the defense of our collective life is only possible through rebellion against the bad government, their businesses, and their organized crime.

We denounce the following:

For all of these reasons, we reiterate that it our obligation to protect life and dignity, that is, resistance and rebellion, from below and to the left, a task that can only be carried out collectively. We build rebellion from our small local assemblies that combine to form large communal assemblies, ejidal assemblies, Juntas de Buen Gobierno [Good Government Councils], and coalesce as agreements as peoples that unite us under one identity. In the process of sharing, learning, and constructing ourselves as the National Indigenous Congress, we see and feel our collective pain, discontent, and ancestral roots. In order to defend what we are, our path and learning process have been consolidated by strengthening our collective decision-making spaces, employing national and international juridical law as well as peaceful and civil resistance, and casting aside the political parties that have only brought death, corruption, and the buying off of dignity. We have made alliances with various sectors of civil society, creating our own resources in communication, community police and self-defense forces, assemblies and popular councils, and cooperatives; in the exercise and defense of traditional medicine; in the exercise and defense of traditional and ecological agriculture; in our own rituals and ceremonies to pay respect to mother earth and continue walking with and upon her, in the cultivation and defense of native seeds, and in political-cultural activities, forums, and information campaigns.

This is the power from below that has kept us alive. This is why commemorating resistance and rebellion also means ratifying our decision to continue to live, constructing hope for a future that is only possible upon the ruins of capitalism.

Given that the offensive against the people will not cease, but rather grow until it finishes off every last one of us who make up the peoples of the countryside and the city, who carry profound discontent that emerges in new, diverse, and creative forms of resistance and rebellion, this Fifth National Indigenous Congress has decided to launch a consultation in each of our communities to dismantle from below the power that is imposed on us from above and offers us nothing but death, violence, dispossession, and destruction. Given all of the above, we declare ourselves in permanent assembly as we carry out this consultation, in each of our geographies, territories, and paths, on the accord of the Fifth CNI to name an Indigenous Governing Council whose will would be manifest by an indigenous woman, a CNI delegate, as an independent candidate to the presidency of the country under the name of the National Indigenous Congress and the Zapatista Army for National Liberation in the electoral process of 2018. We confirm that our struggle is not for power, which we do not seek. Rather, we call on all of the originary peoples and civil society to organize to put a stop to this destruction and strengthen our resistances and rebellions, that is, the defense of the life of every person, family, collective, community, or barrio. We make a call to construct peace and justice by reweaving ourselves from below, from where we are what we are.

This is the time of dignified rebellion, the time to construct a new nation by and for everyone, to strengthen power below and to the anticapitalist left, to make those who are responsible for all of the pain of the peoples of this multi-colored Mexico pay.

Finally, we announce the creation of the official webpage of the CNI: www.congresonacionalindigena.org